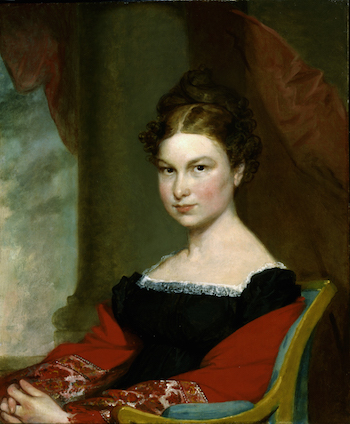 In last month’s newsletter, I ruminated on how women can move history. Now I’m back with more on the subject, specifically Phebe Lord Upham, born in Maine in 1804.

I saw this portrait of Phebe at the Bowdoin College Museum of Art, when I reviewed an exhibition for Arts Fuse. She was so striking that Gilbert Stuart asked to paint her picture when she was 19, two years before she married a Bowdoin College professor and moved to Brunswick. Don’t you love her steely look, a combination of determination and righteousness?

When her family grew to include six children, she must have deployed that look often. She also would have leveled it at her minister when arguing with him about her right to speak at church meetings. She was very religious, wrote several books about spiritual experience and felt stifled by the church rule that only men could speak. According to one historian, “she made a nuisance of herself in the eyes of the minister.”

When it came to slavery, she did speak out. She advocated for abolition and is reputed to have opened her home to the Underground Railroad. When Harriet Beecher Stowe moved to Brunswick, Phebe befriended her. Harriet was an essayist, not yet a novelist, but the women shared a passion for writing. Phebe gave Harriet the book she had written about the life of Phebe Ann Jacobs, a Black woman born into slavery who had moved to Maine when her “mistress” married the president of Bowdoin College.

When a Black man on his way to Canada knocked on her door, Phebe got her friend involved. The man had been living as a free man in Salem, Massachusetts, but feared being captured and returned to slavery when the Fugitive Slave Act was enacted. It is believed that Phebe gave the man food and directed him to Harriet for shelter. During a church service several months later, Harriet, while seated with Phebe in the pew that belonged to Phebe and her husband, experienced a vision of a Black man being whipped to death. That vision impelled her to write what became her famous novel.

Uncle Tom’s Cabin incorporates elements of her friend’s account of Phebe Ann Jacobs’s life, and characteristics of the man her friend sent to her for shelter. As we know, the book became a best seller, inflamed the debate about slavery, and made Harriet famous.

Phebe Lord Upham never achieved anything like her friend’s national reputation, but she’s the one I’m thinking about. If she had not taken an interest in a formerly enslaved woman and written her life story, if she had not opened her home as a stop on the Underground Railroad, if she had not befriended Harriet, if she had not invited Harriet to share a church pew, would Uncle Tom’s Cabin have been written as it was? What about the many conversations the two women had of which there is no record – what role did they play in shaping the book that sharpened the dispute which became a war? Individual acts can have consequences, even when the acts are small and the consequences entirely unpredictable.

Phebe Lord Upham may not have been allowed to speak at church meetings, but she influenced events. Plus, with a gaze like hers, how could history fail to be moved?

IN OTHER NEWS: I am pleased that Boston Book Blog, founded and edited by Jessica A. Kent, published three essays where I reflect on Boston’s Civil War monuments. You can see them here, here and here

AND IN MORE OTHER NEWS: You have weighed in with the books you intend to read or re-read this summer. All I can say is Whew! This is serious stuff!

The Widow Cliquot, Tilar Mazzeo
(from Anne in New York)

Behind the Scenes, Or, Thirty Years a Slave, and Four Years in the White House, Elizabeth Keckley

The Odyssey, as newly translated by Emily Wilson

Klara and the Sun, Kazuo Ishiguro

Breasts and Eggs, Mieko Kawakami
(from Alicia in Boston)

Night Boat to Tangiers, Kevin Barry
(from Andrew in Boston)